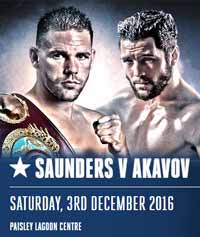 Review by AllTheBestFights.com: 2016-12-03, disappointing fight between Billy Joe Saunders and Artur Akavov: it gets two stars.

The undefeated Wbo Mw champion Billy Joe Saunders entered this fight with a perfect record of 23-0-0 (12 knockouts) and he is ranked as the No.5 middleweight in the world (currently the #1 in this division is Gennady Golovkin). He fought twice last year winning over Yoann Bloyer (=Saunders vs Bloyer) and Andy Lee (=Lee vs Saunders).
His opponent, Artur Akavov, has an official boxing record of 16-1-0 (7 knockouts) and he entered as the No.31 in the same weight class. He suffered his only loss when he faced Oleg Liseev in 2012, since then he has collected 11 victories beating Todd Manuel in 2016. Saunders vs Akavov is valid for the WBO World middleweight title (Saunders’ first defense). Watch the video and rate this fight!