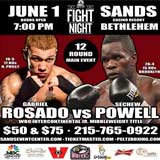 Review: 2012-06-01, pleasant fight and nice TKO in the ninth round: Gabriel Rosado vs Sechew Powell gets three stars. Sechew Powell (26-4-0) entered as the No.39 light middleweight in the world while Gabriel Rosado (19-5-0) entered as the No.13. Powell vs Rosado is valid for the vacant WBO Inter-Continental light middleweight title. Watch the video!