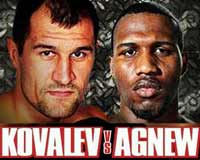 Review: 2014-03-29, pretty good fight between Sergey Kovalev and Cedric Agnew: it gets three stars. Both undefeated, Sergey Kovalev entered this fight with a professional boxing record of 23-0-1 (21 KOs=91%) and he is ranked as the No.4 light heavyweight in the world while Cedric Agnew, has a perfect record of 26-0-0 (13 knockouts) and he entered as the No.15 in the same weight class (currently the #1 in this division is Bernard Hopkins).
They both had a very good amateur career in their countries, in fact Kovalev won 193 fights out of 215 amateur bouts winning the gold medal in 2005 (Russian Championships) while Agnew won the gold in the 2003 US national junior olympics (189lbs) and in the 2004 US under-19 championships at 178lbs; but their professional careers are very different since Agnew has never fought for a world title and he has never faced any former world champions. Kovalev vs Agnew is valid for the WBO light heavyweight title (Kovalev’s second defense). Watch the video and rate this fight!

Report broken video
« 2014 BOXING fight – Karim Mayfield vs Thomas Dulorme – full fight Video
2014 MMA fight – Steve Carl vs Rousimar Palhares – full fight Video WSOF 9 »
HELP US!!! Since the CORONAVIRUS pandemic started, AllTheBestFights.com has struggled to survive! If you have enjoyed this website for the past 10 years, today we ask you for a little help: