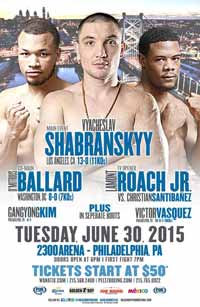 Review by AllTheBestFights.com: 2015-06-30, entertaining fight between Vyacheslav Shabranskyy and Paul Parker: it gets three stars.

Both undefeated, the Ukrainian Vyacheslav Shabranskyy entered this fight with a perfect boxing record of 13-0-0 (11 KOs=85%) and he is ranked as the No.23 light heavyweight in the world while his opponent, Paul Parker, has an official record of 7-0-0 (4 knockouts) and he entered as the No.96 cruierweight. Shabranskyy has already fought twice in 2015 beating Garrett Wilson (=Wilson vs Shabranskyy) and Fabiano Pena while Parker is at his first bout of the year. Shabranskyy vs Parker is the main event of the evening. Watch the video and rate this fight!