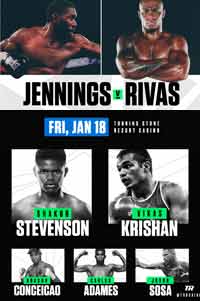 The undefeated Olympian Shakur Stevenson entered this fight with a perfect record of 9-0-0 (5 knockouts) and he is ranked as the No.40 super featherweight in the world. He fought five times last year beating Aelio Mesquita, Carlos Ruiz and Viorel Simion in his last three (Shakur Stevenson vs Viorel Simion).
His opponent, Jessie Cris Rosales, has an official boxing record of 22-1-1 (10 knockouts) and he entered as the No.65 featherweight. He lost to Jhonny Gonzalez in 2017 (Jhonny Gonzalez vs Jessie Cris Rosales) but he came back to win with Ibrahim Balla in 2018. Stevenson vs Rosales is on the undercard of Bryant Jennings vs Oscar Rivas. Watch the video and rate this fight!