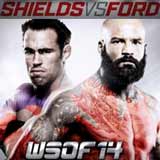 Review: 2014-10-11, pretty good finish between Jake Shields and Ryan Ford but it is not enough to get three stars. The black belt in Bjj and former Strikeforce Mw champion Jake Shields entered this fight with a professional mma record of 29-7-1 (45% finishing rate) and he is ranked as the No.9 welterweight in the world, he has already fought once in 2014 but he lost to Hector Lombard and he was released from the Ufc (=Shields vs Lombard).
His opponent, Ryan Ford, has an official record of 22-4-0 (91% finishing rate) and he entered as the No.41 in the same weight class, he suffered his last defeat in 2011 when he faced David Hulett, since then he has won six consecutive bouts, the last one against Joel Powell. Shields vs Ford is the main event of World Series of Fighting 14. Watch the video and rate this fight!