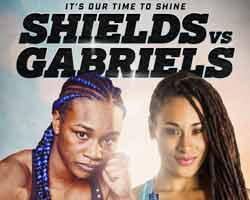 Review by AllTheBestFights.com: 2018-06-22, great performance by both boxers: Claressa Shields vs Hanna Gabriels is close to get four stars!

The undefeated 2012, 2016 Olympic gold medalist and Wbc, Ibf super-Mw champion Claressa Shields entered this fight with a perfect record of 5-0-0 (2 knockouts) and she is ranked as the No.1 super middleweight in the world. In her last three fights she has won over Sydney LeBlanc, Nikki Adler and Tori Nelson (Claressa Shields vs Tori Nelson).
Her opponent, the former world champion in two different weight classes Hanna Gabriels, has an official boxing record of 18-1-1 (11 knockouts) and she entered as the No.1 super welterweight. She suffered her only loss when she faced Oxandia Castillo in 2013, since then she has won five consecutive bouts beating Natasha Spence and taking revenge on Castillo in 2017. Shields vs Gabriels is valid for the vacant IBF and WBA World Female middleweight titles. Watch the video and rate this fight!