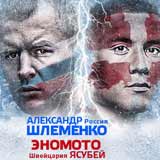 Review: 2014-12-20, good fight between Alexander Shlemenko and Yasubey Enomoto: it gets three stars. The former Bellator Mw champion Alexander Shlemenko entered this fight with a professional mma record of 50-9-0 (74% finishing rate) and he is ranked as the No.24 middleweight in the world but he lost his last two fights: against Tito Ortiz (Shlemenko moved up in weight class to the light-Hw division for this bout, Shlemenko vs Ortiz) and Brandon Halsey (fight in which he lost the Bellator Mw belt, Shlemenko vs Halsey).
His opponent, the former M-1 Global Ww champion Yasubey Enomoto, has an official record of 12-5-0 (42% finishing rate) but he is not ranked as he hasn’t fought since December 14, 2013 when he defeated Rustam Bogatirev. Shlemenko vs Enomoto is the main event of “Fight Nights: Battle of Moscow 18”. Watch the video and rate this fight!