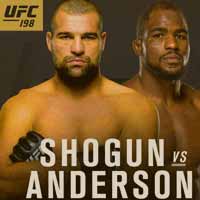 Review by AllTheBestFights.com: 2016-05-14, close fight between Mauricio Rua and Corey Anderson: it gets three stars.

The black belt in Bjj, former Pride Mw and Ufc light-Hw champion Mauricio ‘Shogun’ Rua entered this fight with a record of 23-10-0 (87% finishing rate) and he is ranked as the No.12 light heavyweight in the world but he lost two out of his last three bouts, against Dan Henderson (=Shogun vs Henderson 2) and Ovince St Preux (=Shogun Rua vs St Preux); after this bout he beat Antonio Rogerio Nogueira (=Shogun vs Nogueira 2).
His opponent, the Tuf 19 tournament winner Corey Anderson, has an mma record of 8-1-0 (38% ko/tko victory rate – he has never won by submission) and he entered as the No.15 in the same weight class. He suffered his only loss in 2015, against Gian Villante, after this fight he has won three consecutive bouts beating Tom Lawlor in 2016 (=Anderson vs Lawlor). Shogun Rua vs Anderson is on the undercard of Fabricio Werdum vs Stipe Miocic – UFC 198. Watch the video and rate this fight!