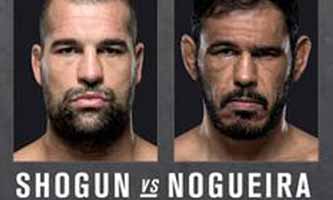 Review by AllTheBestFights.com: 2015-08-01, nice and tough exchanges between Mauricio Rua and Antonio Rogerio Nogueira: their second fight gets three stars (UFC Fight of the Night).

The black belt in Bjj and former Pride Mw and Ufc light-Hw champion Mauricio ‘Shogun’ Rua entered this fight with a pro mma record of 22-10-0 (91% finishing rate) and he is ranked as the No.16 light heavyweight in the world but he comes off two consecutive losses, against Dan Henderson (=Shogun vs Henderson 2) and Ovince St Preux (=Rua vs St Preux).
His opponent, the black belt in Brazilian jiu-jitsu Antonio Rogerio ‘Minotouro’ Nogueira, has a record of 21-6-0 (57% finishing rate) and he entered as the No.11 in the same weight class and he lost his last bout as well, against Anthony Johnson (=Johnson vs Nogueira). In their first fight Shogun defeated Minotouro by unanimous decision (June 26, 2005); Rua vs Nogueira 2 is on the undercard of Ronda Rousey vs Bethe Correia – UFC 190. Watch the video and rate this fight!