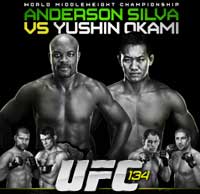 Review: 2011-08-27, in 2006 Anderson Silva lost his last fight and his opponent was just Yushin Okami. In this second fight, after five years, the UFC middleweight champion Anderson Silva seems to play with Okami and in the second round Silva knocked Okami out giving his Brazilian fans a KO victory. Silva vs Okami, main fight of the UFC 134, was valid for the UFC Middleweight Championship. Watch the video!