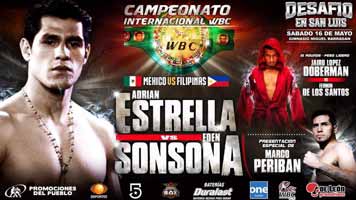 Review by AllTheBestFights.com: 2015-05-16, wild exchanges and spectacular finish: Adrian Estrella vs Eden Sonsona is very close to get four stars!

The undefeated Adrian Estrella entered this fight with a perfect boxing record of 22-0-0 (20 KOs=91%) and he is ranked as the No.3 super featherweight in the world (currently the #1 in this division is Takashi Uchiyama). ‘Diamante’ Estrella has already fought once in 2015 beating Adones Aguelo (=Estrella vs Aguelo).
His opponent, Eden Sonsona, has an official record of 33-6-2 (11 knockouts) and he entered as the No.105 lightweight. He suffered his last defeat in 2010 when he faced Jonathan Oquendo, since then he has collected seven victories and two draws. Estrella vs Sonsona is valid for the WBC International Silver super featherweight title. Watch the video and rate this fight!