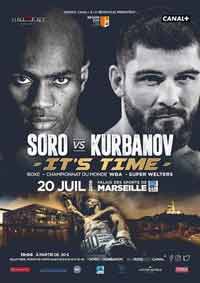 Review by AllTheBestFights.com: 2019-07-20, pretty good finish but the rest of the fight was not so exciting: Michel Soro vs Anderson Prestot gets two stars.

The former interim WBA super-Ww champion Michel Soro entered this fight with a pro boxing record of 33-2-1 (22 knockouts) and he is ranked as the No.15 super welterweight in the world. He lost to Brian Carlos Castano in 2017 (via split decision, Soro vs Castano) but then he has won three fights beating John Vera (Michel Soro vs John Vera) and Greg Vendetti in 2018 (Michel Soro vs Greg Vendetti).
His opponent, Anderson Prestot (who replaces Magomed Kurbanov), has an official record of 23-1-0 (12 knockouts) and he entered as the No.58 middleweight. He suffered his only loss when he faced Frank Haroche in 2015, since then he has won eight bouts defeating Jose Miguel Fandino in 2019. Soro vs Prestot is valid for the vacant WBA World super welterweight title. Watch the video and rate this fight!