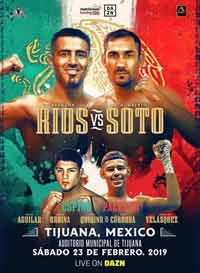 Review by AllTheBestFights.com: 2019-02-23, good performance by both boxers: Brandon Rios vs Humberto Soto gets three stars.

The former Wba Lw champion Brandon Rios entered this fight with a record of 35-4-1 (26 knockouts) and he is ranked as the No.17 super welterweight in the world. He fought twice last year losing to Danny Garcia (Danny Garcia vs Brandon Rios) and beating Ramon Alvarez (Brandon Rios vs Ramon Alvarez).
His opponent, Humberto Soto, has a boxing record of 68-9-2 (37 knockouts) and he entered as the No.72 welterweight. He was defeated by Antonio Orozco in 2015 (Antonio Orozco vs Humberto Soto) but then he has won over Jose Daniel Ruiz (Humberto Soto vs Daniel Ruiz), Joel Juarez and Edgar Puerta. Rios vs Soto is the main event of the evening. Watch the video and rate this fight!