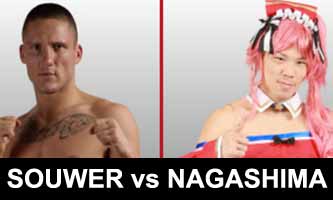 Review by AllTheBestFights.com: 2015-12-31, great fight between Andy Souwer and Yuichiro Nagashima: it gets three stars.

The 2005 and 2007 K-1 World MAX champion Andy Souwer is at his pro mma debut but he has a kickboxing record of 158-19-1 (98 knockouts). He comes off two consecutive defeats in kickboxing fights: against Jonay Risco (4-stars-fight, Souwer vs Risco) and Hinata Watanabe (=Souwer vs Watanabe 2).
His opponent, Yuichiro Nagashima, has an official record 4-2-0 (18-9-1 in kickboxing) but his last mma fight was held in 2006 and he lost to Hiroshi Shiba. Souwer vs Nagashima is on the undercard of Fedor Emelianenko vs Singh Jaideep – Rizin FF 2. Watch the video and rate this fight!