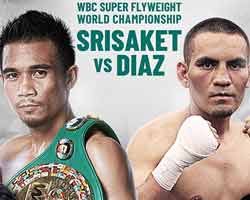 The Wbc super-Flw champion Srisaket Sor Rungvisai (also known as Wisaksil Wangek) entered this fight with a professional boxing record of 46-4-1 (41 KOs=89%) and he is ranked as the No.1 super flyweight in the world. He suffered his last loss when he faced Carlos Cuadras in 2014 (Rungvisai vs Cuadras), since then he has won 18 consecutive bouts defeating Roman Gonzalez twice in 2017 (4-stars fight, Gonzalez vs Rungvisai I and Srisaket Sor Rungvisai vs Roman Gonzalez II) and beating Juan Francisco Estrada (Srisaket Sor Rungvisai vs Juan Francisco Estrada) and Young Gil Bae in 2018 (Srisaket Sor Rungvisai vs Young Gil Bae).
His opponent, Iran Diaz, has an official record of 14-2-3 (6 knockouts) and he entered as the No.12 in the same weight class. He was defeated by Nordine Oubaali in 2016 but then he has beat Hernan Marquez, Luis Concepcion (Luis Concepcion vs Iran Diaz) and Edgar Martinez; after this bout he drew with Adolfo Castillo. Srisaket vs Diaz is valid for the WBC World super flyweight title (Rungvisai’s third defense) – ONE FC Championship. Watch the video and rate this fight!