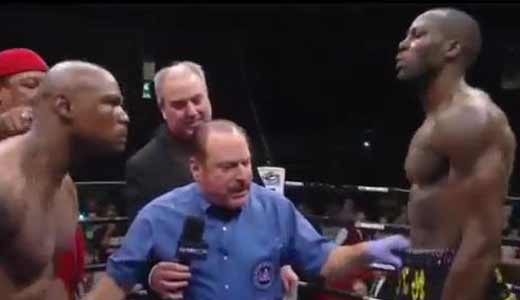 Review: 2014-04-04, back and forth battle with some wild exchanges and three knockdowns: Amir Mansour vs Steve Cunningham is one of the best boxing fight of the year and it gets four stars. The undefeated Amir Mansour entered this fight with a perfect boxing record of 20-0-0 (15 KOs=75%) and he is ranked as the No.21 heavyweight in the world, he started his professional career in 1997 but after four years he went to prison and served eight years for trafficking cocaine; now he is 41 years old (four years older than Cunningham).
His opponent, Steve Cunningham, has an official record of 26-6-0 (12 knockouts) and he entered as the No.26 in the same weight class, he was the the IBF cruiserweight world champion from May 2007 to December 2008 and from June 2010 to October 2011; since 2012 he has moved up in weight class to the heavyweight division but he lost two out of his last four fights. Mansour vs Cunningham is valid for the USBA heavyweight title. Watch the video and rate this fight!