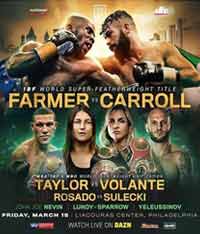 Review by AllTheBestFights.com: 2019-03-15, spectacular finish between Maciej Sulecki and Gabriel Rosado: it is close to get four stars!

Maciej Sulecki entered this fight with a boxing record of 27-1-0 (11 knockouts) and he is ranked as the No.10 middleweight in the world (currently the #1 in this division is Saul ‘Canelo’ Alvarez). He fought twice last year losing his first pro bout against Daniel Jacobs (Daniel Jacobs vs Maciej Sulecki) and beating Jean Michel Hamilcaro.
His opponent, Gabriel Rosado, has an official record of 24-11-1 (14 knockouts) and he entered as the No.28 in the same weight class. He lost two consecutive bouts between 2016 and 2017, against Willie Monroe Jr (Monroe Jr vs Rosado) and Martin Murray (via majority decision, Murray vs Rosado) but then he has beat Glen Tapia (Gabriel Rosado vs Glen Tapia) and has tied with Luis Arias. Sulecki vs Rosado is on the undercard of Tevin Farmer vs Jono Carroll. Watch the video and rate this fight!