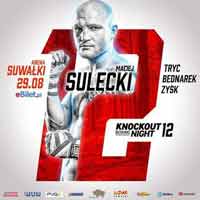 Review by AllTheBestFights.com: 2020-08-29, one sided fight between Maciej Sulecki and Sasha Yengoyan: it gets two stars.
Maciej Sulecki entered this fight with a pro boxing record of 28-2-0 (11 knockouts) and he is ranked as the No.11 middleweight in the world. He fought twice last year beating Gabriel Rosado (Maciej Sulecki vs Gabriel Rosado) and losing to Demetrius Andrade (Demetrius Andrade vs Maciej Sulecki).
His opponent, Sasha Yengoyan, has an official boxing record of 44-7-1 (26 knockouts) and he entered as the No.99 super middleweight. He fought four times in 2019 defeating Nikola Matic, Senad Karic and Francesco Lezzi but then he lost to Toni Kraft. Yengoyan vs Sulecki is the main event of the evening. Watch the video and rate this fight!

Report broken video
« 2020 BOXING fight – Jose Ramirez vs Viktor Postol – fight Video WBC, WBO
Best fights of the week 35, year 2020 »
HELP US!!! Since the CORONAVIRUS pandemic started, AllTheBestFights.com has struggled to survive! If you have enjoyed this website for the past 10 years, today we ask you for a little help: