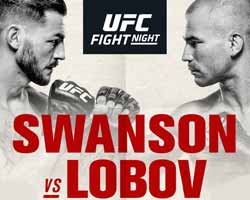 Review by AllTheBestFights.com: 2017-04-22, nice and tough fight between Cub Swanson and Artem Lobov: it gets three stars (UFC Fight of the Night).

The black belt in Brazilian jiu-jitsu and judo Cub Swanson entered this fight with a professional mma record of 24-7-0 (62% finishing rate) and he is ranked as the No.6 featherweight in the world (currently the #1 in this division is Jose Aldo). He lost two consecutive fights between 2014 and 2015, against Frankie Edgar (=Edgar vs Swanson) and Max Holloway (=Swanson vs Holloway), but then he has won over Hacran Dias (=Swanson vs Dias), Tatsuya Kawajiri and Doo Ho Choi (4-stars fight, Swanson vs Choi).
His opponent, Artem Lobov, has an official record of 13-12-1 (46% finishing rate) and he entered as the No.58 in the same weight class. He suffered two consecutive defeats between 2015 and 2016, against Ryan hall (=Lobov vs Hall) and Alex White, but then he has beat Chris Avila and Teruto Ishihara. Cub Swanson vs Artem Lobov is the main event of UFC Fight Night 108. Watch the video and rate this fight!