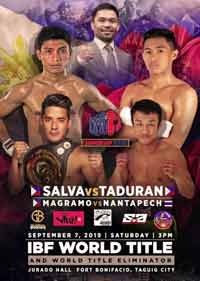 Review by AllTheBestFights.com: 2019-09-07, disappointing fight between Samuel Salva and Pedro Taduran: it gets two stars.

The undefeated Samuel Salva entered this fight with a perfect boxing record of 17-0-0 (10 knockouts) and he is ranked as the No.18 minimumweight in the world. In his last three fights he has won over Ryan Ralozo, Jason Mopon and Rene Mark Cuarto.
His opponent, Pedro Taduran, has a record of 13-2-0 (10 KOs=77%) and he entered as the No.16 in the same weight class. He fought three times last year beating Jerry Tomogdan and Jeffrey Galero but between these two bouts he lost to Wanheng Menayothin (Wanheng Menayothin vs Pedro Taduran). Salva vs Taduran is valid for the vacant IBF World minimumweight title. Watch the video and rate this fight!