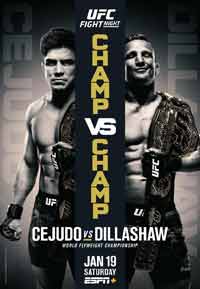 Review by AllTheBestFights.com: 2019-01-19, some good exchanges between Greg Hardy and Allen Crowder but it is not enough to get three stars: it gets two.

The former American football NFL defensive end Greg Hardy entered this fight with a pro mma record of 3-0-0 (100% ko/tko victory rate – he has never won via submission) and he is ranked as the No.162 heavyweight in the world. He has won all his three professional mma bouts via knockout in the first round and in less than one minute: against Austen Lane, Tebaris Gordon and Ray Jones.
His opponent, Allen Crowder, has a record of 9-3-0 (89% finishing rate) but he is not ranked as he hasn’t fought since December 2, 2017 when he was defeated by Justin Willis, before this fight he had beat Don’Tale Mayes. Hardy vs Crowder is on the undercard of Henry Cejudo vs TJ Dillashaw – UFC Fight Night 143 (also known as UFC on ESPN+ 1). Watch the video and rate this fight!