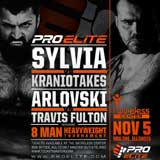 Review: 2011-11-05, at the end of the third round Andrei Arlovski knocks Travis Fulton out with one of the best ko of the year but unfortunately the fight was boring and we can’t give more than three stars. Andrei Arlovski entered the fight with a record of 16-9-0 while Travis Fulton had a record of 247-48-10. Arlovski vs Fulton was on the undercard of Tim Sylvia vs Andreas Kraniotakes (ProElite – Big Guns). Watch the video!

Review: 2011-08-27, Andrei Arlovski dominated Ray Lopez but the fight was not very exciting: 2 stars. Arlovski vs Lopez is on the undercard of Kendall Grove vs Joe Riggs (ProElite). Watch the video!