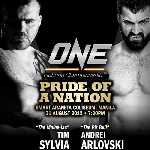 Event: One FC 5: Pride of a Nation