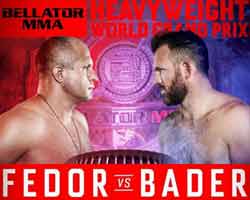 Review by AllTheBestFights.com: 2019-01-26, good start between Fedor Emelianenko and Ryan Bader: it gets three stars.

The 42-year-old former Pride, world combat sambo champion and black belt in judo Fedor Emelianenko entered this fight with a professional mma record of 38-5-0 (76% finishing rate) and he is ranked as the No.19 heavyweight in the world (currently the #1 in this division is Daniel Cormier). ‘The Last Emperor’ lost to Matt Mitrione in 2017 (Fedor Emelianenko vs Matt Mitrione) but he came back to win in 2018 against Frank Mir (Fedor Emelianenko vs Frank Mir) and Chael Sonnen (Fedor Emelianenko vs Chael Sonnen).
His opponent, the Bellator light-Hw champion and Tuf 8 tournament winner Ryan Bader (seven years younger than Fedor), has an official record of 26-5-0 (54% finishing rate) and he entered as the No.5 in the same weight class. He suffered his last loss when he faced Anthony Johnson in 2016 (Johnson vs Bader) since then he has won six fights defeating Muhammed King Mo Lawal (Ryan Bader vs Muhammed King Mo Lawal) and Matt Mitrione in 2018 (Ryan Bader vs Matt Mitrione). Fedor vs Bader, main event of Bellator 214, is the final of the Bellator Heavyweight World Grand Prix tournament and it is valid for the Bellator heavyweight title. Watch the video and rate this fight! 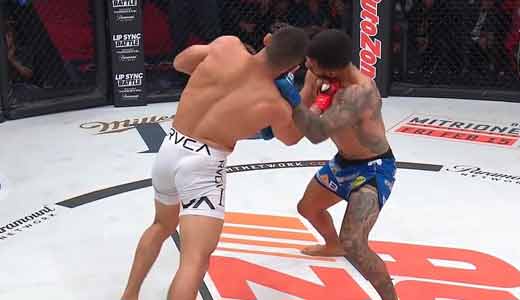 Review by AllTheBestFights.com: 2019-01-26, exciting back and forth fight between Aaron Pico and Henry Corrales: this is the first mma fight of the year 2019 to get four stars!

The 2013 cadet Free Style Wrestling world champion Aaron Pico entered this fight with a pro mma record of 4-1-0 (100% ko/tko victory rate – he has never won via submission) and he is ranked as the No.42 featherweight in the world. He lost his first professional mma fight against Zach Freeman (Aaron Pico vs Zach Freeman) but then he has won four bouts beating Justin Linn, Shane Krutchen, Lee Morrison and Leandro Higo (Leandro Higo vs Aaron Pico).
His opponent, Henry Corrales, has a record of 16-3-0 (75% finishing rate) and he entered as the No.31 in the same weight class. He lost three consecutive bouts between 2015 and 2016, the last one against Patricio Freire (Patricio Freire vs Henry Corrales), but then he has won four fights defeating Georgi Karakhanyan and Andy Main in 2018. Pico vs Corrales is on the undercard of Fedor Emelianenko vs Ryan Bader – Bellator 214. Watch the video and rate this fight! 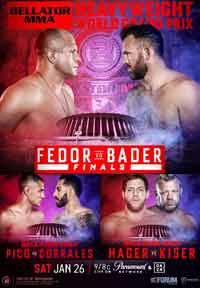 Review by AllTheBestFights.com: 2019-01-26, fight not particularly good between Jack Swagger and JW Kiser: it gets two stars.

The professional WWE wrestler Jake Hager (also known as Jack Swagger) is at his professional mma debut while his opponent, JW Kiser, has an official record of 0-1-0 and he comes off the loss against Antonio Martinez suffered in 2018 via tko in less than 30 seconds. Hager vs Kiser is on the undercard of Fedor Emelianenko vs Ryan Bader – Bellator 214. Watch the video and rate this fight!