Review: 2014-04-12, entertaining and tough fight between Raul Catinas and Brice Guidon: it gets three stars. Raul Catinas entered this fight with a professional kickboxing record of 20-6-0 (14 knockouts) and he is ranked as the No.12 heavyweight in the world, he fought three times in 2013 losing only his first bout against Igor Jurkovic.
His opponent, Brice Guidon, has an official record of 29-10-0 (14 knockouts), he lost four out of his last five bouts. Catinas vs Guidon is the main event of SuperKombat WGP I 2014. Watch the video and rate this fight!

Review: 2012-12-31, pretty good fight between Semmy Schilt and Brice Guidon: three stars. Semmy Schilt (39-6-1) entered as the No.3 heavyweight in the world while Brice Guidon (28-7-0) entered as the No.11. In their first fight Schilt defeated Guidon by unanimous decision (March 23, 2012); this second fight is the eighth-final of 2012 Glory heavyweight tournament – GLORY 4 Tokyo. Watch the video! 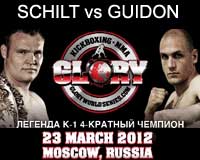 Review: 2011-05-28, Gokhan Saki defeated Brice Guidon and won the final of the Glory World Series of KickBoxing. Nice third round but the fight was not very exciting. Watch the video!