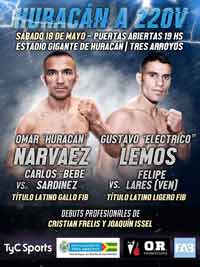 Review by AllTheBestFights.com: 2019-05-18, fight not so exciting between Omar Narvaez and Carlos Jorge Luis Sardinez: it gets two stars.

The 43-years-old (17 years older than Sardinez) former world champion in two different weight classes Omar Andres Narvaez entered this fight with a boxing record of 48-3-2 (25 knockouts) but he is not ranked as he hasn’t fought since April 21, 2018 when he was defeated by Zolani Tete (Zolani Tete vs Omar Andres Narvaez); before this bout, in February 2018, he had beat Jesus Vargas (Omar Andres Narvaez vs Jesus Vargas 2).
His opponent, Carlos Jorge Luis Sardinez, has an official record of 15-1-0 (2 knockouts) and he entered as the No.97 bantamweight in the world. Narvaez vs Sardinez is valid for the vacant IBF Latino bantamweight title. Watch the video and rate this fight!