Review by AllTheBestFights.com: 2015-09-12, good finish between Cornelius Bundrage and Jermall Charlo: it gets three stars.

Cornelius Bundrage entered this fight with a boxing record of 34-5-0 (19 knockouts) and he is ranked as the No.3 super welterweight in the world (currently the #1 in this division is Saul ‘Canelo’ Alvarez). He suffered his last loss in 2013, against Ishe Smith (=Bundrage vs Smith), but then he has won over Joey Hernandez and Carlos Molina (=Molina vs Bundrage).
His opponent, the undefeated Jermall Charlo, has a perfect record of 21-0-0 (16 KOs=76%) and he entered as the No.35 middleweight; he has fought once in 2015 defeating Michael Finney. ‘K9’ Bundrage vs Charlo is valid for the IBF World super welterweight title (Bundrage’s first defense); undercard of Peter Quillin vs Michael Zerafa. Watch the video and rate this fight!

END_OF_DOCUMENT_TOKEN_TO_BE_REPLACED 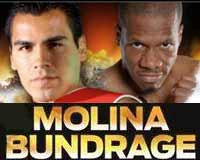 Review: 2014-10-11, disappointing world title fight between Carlos Molina and Cornelius Bundrage: it gets two stars. Carlos Molina entered this fight with a b oxing record of 22-5-2 (6 knockouts) but he is not ranked as he hasn’t fought since September 14, 2013 when he defeated Ishe Smith winning the IBF light-Mw title (=Smith vs Molina).
His opponent, the 41-year-old Cornelius Bundrage (ten years older than Molina), has a record of 33-5-0 (19 knockouts) and he entered as the No.7 light middleweight (currently the #1 in this division is Saul ‘Canelo’ Alvarez), he suffered his last defeat in 2013 when he faced Ishe Smith losing the Ibf belt (=Bundrage vs Smith) but he came back to win in 2014 beating Joey Hernandez. ‘K9’ Bundrage vs Molina vs is valid for the IBF light middleweight title. Watch the video and rate this fight!

END_OF_DOCUMENT_TOKEN_TO_BE_REPLACED 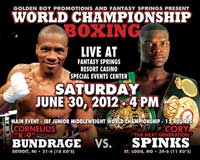