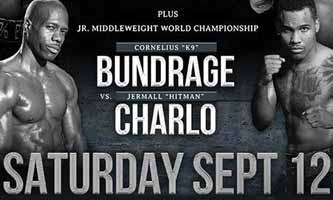 Review by AllTheBestFights.com: 2015-09-12, good finish between Cornelius Bundrage and Jermall Charlo: it gets three stars.

Cornelius Bundrage entered this fight with a boxing record of 34-5-0 (19 knockouts) and he is ranked as the No.3 super welterweight in the world (currently the #1 in this division is Saul ‘Canelo’ Alvarez). He suffered his last loss in 2013, against Ishe Smith (=Bundrage vs Smith), but then he has won over Joey Hernandez and Carlos Molina (=Molina vs Bundrage).
His opponent, the undefeated Jermall Charlo, has a perfect record of 21-0-0 (16 KOs=76%) and he entered as the No.35 middleweight; he has fought once in 2015 defeating Michael Finney. ‘K9’ Bundrage vs Charlo is valid for the IBF World super welterweight title (Bundrage’s first defense); undercard of Peter Quillin vs Michael Zerafa. Watch the video and rate this fight!