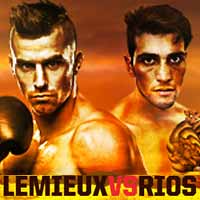 Review by AllTheBestFights.com: 2016-10-22, pretty good fight between David Lemieux and Cristian Rios: it gets three stars.

The former Ibf Mw champion David Lemieux entered this fight with a pro boxing record of 35-3-0 (32 KOs=91%) and he is ranked as the No.4 middleweight in the world. He lost to #1 Gennady Golovkin last year (=Golovkin vs Lemieux) but he came back to win against Glen Tapia in 2016 (=Lemieux vs Tapia).
His opponent, Cristian Fabian Rios, has a record of 21-7-3 (6 knockouts) and he entered as the No.51 in the same weight class. He also lost in 2015, against Tommy Langford (=Rios vs Langford), and then he has won once in 2016, with Luis Alejandro Moreno. Lemieux vs Rios is the main event of the evening. Watch the video and rate this fight!

END_OF_DOCUMENT_TOKEN_TO_BE_REPLACED

Review by AllTheBestFights.com: 2015-10-03, good fight between Cristian Rios and Tommy Langford: it gets three stars.

Cristian Fabian Rios entered this fight with a pro boxing record of 20-6-3 (6 knockouts) and he is ranked as the No.42 middleweight in the world. He has already fought three times in 2015 winning over Martin Fidel Rios and Cesar Hernan Reynoso but then he drew with Gaston Alejandro Vega.
His opponent, the undefeated Tommy Langford, has a perfect record of 13-0-0 (4 knockouts) and he comes off the victories over Wayne Reed and Julio Cesar Avalos. Rios vs Langford is valid for the WBO Inter-Continental middleweight title. Watch the video and rate this fight!