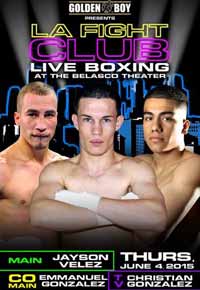 Review by AllTheBestFights.com: 2015-06-04, good fight between Jayson Velez and Daniel Ramirez: it gets three stars.

The undefeated Jayson Velez entered this fight with a pro boxing record of 22-0-1 (16 knockouts) and he is ranked as the No.18 featherweight in the world while his opponent, Daniel Ramirez, has an official record of 11-2-0 (5 knockouts). Both boxers have been stopped in their last fight: Velez drew against Evgeny Gradovich (bout valid for the Ibf Fw title Gradovich vs Velez) while Ramirez lost to Eric Hunter. Velez vs Ramirez is the main event of the evening. Watch the video and rate this fight!