Review: 2013-11-09, pretty good fight between Cezar Ferreira and Daniel Sarafian but it is not enough to get three stars. Cezar ‘Mutante’ Ferreira entered the fight with a record of 6-2-0 (83% finishing rate) while Daniel Sarafian had a record of 8-3-0 (88% submission rate). Originally, Ferreira vs Sarafian, was the final of “The Ultimate Fighter: Brazil” but Sarafian was replaced by Sergio Moraes due to an injury; this bout is on the undercard of Vitor Belfort vs Dan Henderson 2 – UFC Ufn 32. Watch the video! 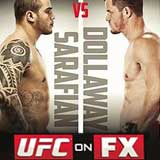 Review: 2013-01-19, good fight with some good exchanges and a good work on the ground in the last part of the bout: CB Dollaway vs Daniel Sarafian gets three stars (UFC Fight of the Night). The American CB Dollaway ranked as the No.48 middleweight in the world, entered the fight with a record of 12-4-0 while Daniel Sarafian had a record of 7-2-0 (Sarafian is not ranked as he hasn’t fought since July 5, 2011 when he defeated Ricardo Silva). Dollaway vs Sarafian is on the undercard of Vitor Belfort vs Michael Bisping – UFC on FX 7. Watch the video!