Review: 2012-02-10, good exchanges in the first round and nice knockout in the second: three stars for Demetrius Andrade vs Angel Hernandez. The undefeated Demetrius Andrade, ranked as the No.22 light middleweight in the world, entered the fight with a record of 15-0-0 while Angel Hernandez had a record of 30-10-0. Andrade vs Hernandez is valid for the vacant WBO NABO light middleweight title. Watch the video! 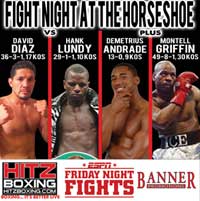