Review: 2014-09-26, the fight between Mike Richman and Ed West gets three stars thanks to a good finish. Mike Richman entered this fight with a pro mma record of 16-5-0 (87% finishing rate) and he is ranked as the No.62 featherweight in the world while his opponent, the black belt in taekwondo and karate Ed West, has an official record of 18-8-0 (56% finishing rate). Richman vs West is on the undercard of Alexander Shlemenko vs Brandon Halsey – Bellator 126. Watch the video and rate this fight!!

Review: 2013-02-28, some good shots and a spectacular finish: Ed West vs Joshua Montoya is close to get four stars! Ed West ranked as the No.63 bantamweight in the world, entered the fight with a record of 17-7-0 while Joshua Montoya had a record of 10-7-0. West vs Montoya is on the undercard of Christian M’pumbu vs Attila Vegh – Bellator 91. Watch the video!

Review: 2012-04-13, great fight, high pace, slam, knockdown: with a knockout or a submission the fight between Marcos Galvao and Ed West could get four stars (fight ended by unanimous decision). Marcos Galvao (10-5-1) entered as the No.19 bantamweight in the world while Ed West (17-6-0) entered as the No.40. Galvao vs West is the quarterfinal of the Bellator Bantamweight Tournament; undercard of Eduardo Dantas vs Zach Makovsky (Bellator 65). Watch the video! 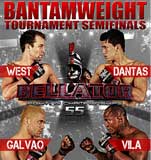 Review: 2011-09-24, pleasant fight between Ed West and Luis Alberto Nogueira but it is not enough for our three stars. Ed West defeated Nogueira by unanimous decision winning the quarterfinal of the Bellator Bantamweight Tournament (Bellator 51) Watch the video!