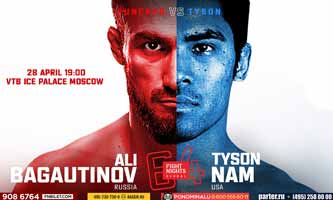 Review by AllTheBestFights.com: 2017-04-28, Ali Bagautinov vs Tyson Nam gets three stars thanks to a good finish.

The former World Combat Sambo champion Ali Bagautinov entered this fight with a professional mma record of 14-5-0 (64% finishing rate) and he is ranked as the No.17 flyweight in the world but he won just one out of his last four fights, against Geane Herrera; after this bout he lost to Kyoji Horiguchi (=Horiguchi vs Bagautinov).
His opponent, Tyson Nam, has an official record of 14-8-1 (57% finishing rate) and he entered as the No.39 in the same weight class. He lost four consecutive fights between 2013 and 2014 but then he has won twice in 2015 and drew with Yoni Sherbatov in 2016. Tyson Nam vs Ali Bagautinov is the main event of Fight Nights Global 64. Watch the video and rate this fight!