Review by AllTheBestFights.com: 2015-02-06, spectacular finish between Francois Ambang and Stephen Richards: it is close to get four stars!

Francois Ambang entered this fight with a kickboxing record of 12-4-0 and he is ranked as the No.11 super middleweight in the world but he comes off the loss against Raymond Daniels suffered in 2014 (4-stars-fight Daniels vs Ambang).
His opponent, Stephen Richards, has an official record of 10-2-1 and he is at his Glory debut. Ambang vs Richards is on the undercard of Rico Verhoeven vs Errol Zimmerman 3 – Glory 19. Watch the video and rate this fight! 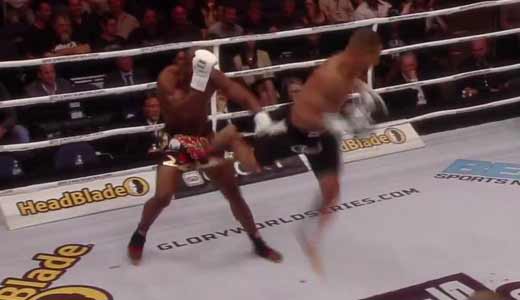 Review: 2014-05-03, the fight between Raymond Daniels and Francois Ambang gets four stars thanks to one of the best knockouts of the year!! Raymond Daniels entered this fight with a professional kickboxing record of 4-1-0 (17-0-0 his amateur record), he is a black belt in American Kenpo, Shotokan Karate and Taekwondo but last year he suffered his first professional defeat when he faced Joseph Valtellini in the semifinal of the Glory Ww tournament (=Valtellini vs Daniels).
His opponent, Francois Ambang, has a record of 11-3-0, he fought twice in 2013 for Glory promotion losing to Joseph Valtellini in June but then he defeated Eddie Walker in November. Daniels vs Ambang is on the undercard of Karapet Karapetyan vs Marc de Bonte 2 – Glory 16. Watch the video and rate this fight!