Review: 2012-05-26, even with some good shots in the first round and the TKO in the second period, the fight between Junior Dos Santos and Frank Mir has not been particularly exciting: two stars. Junior Dos Santos (14-1-0) entered as the No.1 heavyweight in the world while Frank Mir (16-5-0) entered as the No.5. Dos Santos vs Mir is valid for the Ufc Heavyweight Championship title; main event of UFC 146. Rate the video!

END_OF_DOCUMENT_TOKEN_TO_BE_REPLACED 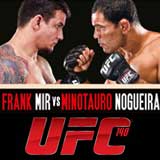 Review: 2011-12-10, exciting fight with an unexpected ending (UFC Submission of the Night, 1st round) between Frank Mir and Antonio Rodrigo Nogueira; in their first fight Mir won Nogueira by TKO. Frank Mir (15-5-0) entered as the No.7 heavyweight the world while Antonio Rodrigo “Minotauro” Nogueira (33-6-1) entered as the No.8. Mir vs Nogueira 2 is on the undercard of Jon Jones vs Lyoto Machida (UFC 140). Watch the video!

END_OF_DOCUMENT_TOKEN_TO_BE_REPLACED

Review: 2011-05-28, just 2 stars for the fight between Frank Mir and Roy Nelson (UFC 130 – Rampage vs Hamill) because both fighters, after the first round, seemed already tired and there is not so much action. Mir defeated Nelson by unanimous decision. Watch the video!