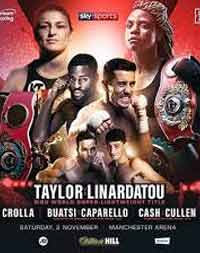 Review by AllTheBestFights.com: 2019-11-02, some good exchanges between Anthony Crolla and Frank Urquiaga but it is not enough to get three stars: it gets two.

The former Wba Lw champion Anthony Crolla entered this fight with a professional record of 34-7-3 (13 knockouts) and he is ranked as the No.7 lightweight in the world but he comes off the loss against current #1 Lw Vasyl Lomachenko (Vasyl Lomachenko vs Anthony Crolla); before this bout, in 2018, he had beat Edson Ramirez (Anthony Crolla vs Edson Ramirez) and Daud Yordan (Anthony Crolla vs Daud Yordan).
His opponent, Frank Urquiaga, has a boxing record of 13-1-1 (1 knockout) and he entered as the No.100 in the same weight class. He was defeated by Edis Tatli last year but then he has beat Arturo Lopez and has tied with Ivan Tomas. Crolla vs Urquiaga is valid for the vacant WBA Continental lightweight title; undercard of Katie Taylor vs Christina Linardatou. Watch the video and rate this fight!