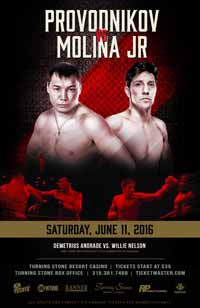 Review by AllTheBestFights.com: 2016-06-11, some good exchanges between Dejan Zlaticanin and Franklin Mamani but it is not enough to get three stars: it gets two.

The undefeated Dejan Zlaticanin entered this fight with a perfect record of 21-0-0 (14 knockouts) and he is ranked as the No.11 lightweight in the world. He fought just once in 2015 beating Ivan Redkach (=Zlaticanin vs Redkach).
His opponent, Franklin Mamani (who replaces Emiliano Marsili), has an official record of 21-2-1 (12 knockouts) and he entered as the No.83 in the same weight class. He suffered his last loss when he faced Gumersindo Lucas Carrasco in 2012, since then he has collected ten consecutive victories. Zlaticanin vs Mamani is valid for the vacant WBC World lightweight title; undercard of Ruslan Provodnikov vs John Molina Jr. Watch the video and rate this fight!