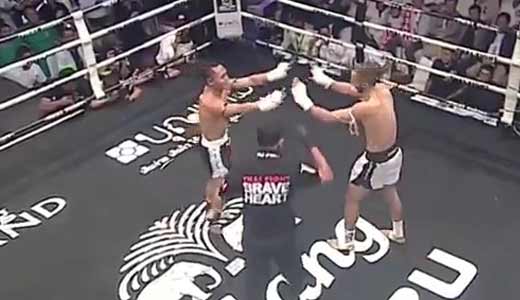 Review: 2014-12-21, the fight between Saenchai and Ghilas Barache gets four stars thanks to one of the best muay thai knockouts of the year!! Saenchai PKSaenchaimuaythaigym entered this fight with a kickboxing record of 262-49-2 (or 277-52-3 on wikipedia) and he is ranked as the No.5 lightweight in the world while his opponent, Ghilas Barache, has an official record of 28-5-0 and he entered as the No.25 super welterweight. Saenchai has already fought 14 times in 2014 losing three bouts: against Petboonchu FA Group, Singdam Kiatmuu9 and Petmorakot Wor Sangprapai. Saenchai vs Barache is a Kard Chuek style fight, they don’t use normal boxing gloves but they use just some rope around their hands like in the ancient muay thai; undercard of Antoine Pinto vs Saiyok Pumpanmuang 2 – Thai Fight 2014 Final Round. Watch the video and rate this fight!