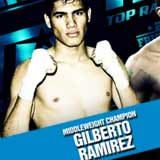 Review: 2014-04-11, some good exchanges between Gilberto Ramirez and Giovanni Lorenzo but it is not enough to get three stars. The undefeated Gilberto Ramirez Sanchez entered this fight with a perfect record of 27-0-0 (21 KOs=78%) and he is ranked as the No.27 middleweight in the world, he is just 22 years old, eleven years younger than Lorenzo and he has already fought in 2014 winning over Don Mouton by tko in the first round.
His opponent, Giovanni Lorenzo, has an official record of 33-6-0 (25 KOs=76%) and he entered as the No.73 in the same weight class, he had three world title shots in his career but he has never managed to win: he faced Sebastian Sylvester in 2009, Felix Sturm in 2010 and Hassan N’Dam N’Jikam in 2011 (=N’Jikam vs Lorenzo). Ramirez vs Lorenzo is valid for the vacant NABF super middleweight title. Watch the video and rate this fight!

Review: 2011-04-02, Hassan N’Dam N’Jikam wins Giovanni Lorenzo but the fight is not very exciting. N’Jikam vs Lorenzo was valid for the interim WBA World middleweight title. Watch the video!