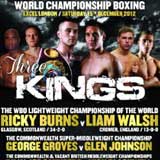 Review: 2012-12-15, great start, some good exchanges, but the pace is not as good as three stars: George Groves vs Glen Johnson gets two. The 24-year-old undefeated George Groves (15-0-0 with 12 victories coming by way of knockout) entered as the No.12 super middleweight in the world while the 43-year-old Glen Johnson (51-17-2) entered as the No.16. Groves vs Johnson is valid for the Commonwealth (British Empire) super middleweight title. Watch the video!

END_OF_DOCUMENT_TOKEN_TO_BE_REPLACED

Review: 2012-07-13, very nice fight thanks to the great performance by both fighters: Glen Johnson vs Andrzej Fonfara is close to get four stars. Glen Johnson (51-16-2) entered as the No.10 super middleweight in the world while Andrzej Fonfara (21-2-0) entered as the No.24 light heavyweight. Johnson vs Fonfara is the main event of the evening. Watch the video!

END_OF_DOCUMENT_TOKEN_TO_BE_REPLACED 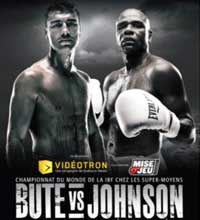 END_OF_DOCUMENT_TOKEN_TO_BE_REPLACED

Review: 2011-06-04, the fight between Carl Froch and Glen Johnson, valid for the semifinal of the Super Six World Boxing Classic, had a very tactical first part, while in the second half of the match it was more enjoyable. Carl Froch defeated Glen Johnson by middle decision. Watch the video!