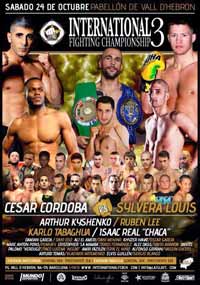 Review by AllTheBestFights.com: 2015-10-24, nice and tough fight between Artur Kyshenko and Ruben Lee: it gets three stars.

Artur Kyshenko entered this fight with a pro kickboxing record of 61-12-1 (32 knockouts) and he is ranked as the No.3 super middleweight in the world while his opponent, Ruben Lee, has a record of 42-13-1. Kyshenko suffered his last loss in 2014 when he faced Karapet Karapetyan, but after this bout he has won six consecutive fights beating Cedric Tousch in his last one (=Kyshenko vs Tousch). Kyshenko vs Lee is on the undercard of Cesar Cordoba vs Sylvera Louis (boxing fight) – IFC 3. Watch the video and rate this fight!