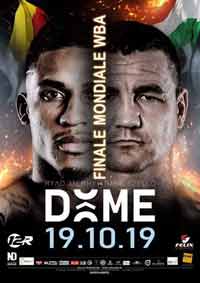 Review by AllTheBestFights.com: 2019-10-19, pretty good finish between Ryad Merhy and Imre Szello: it gets three stars.

Ryad Merhy entered this fight with a pro record of 28-1-0 (23 KOs=82%) and he is ranked as the No.20 cruiserweight in the world. He suffered his only loss when he faced Arsen Goulamirian last year (Arsen Goulamirian vs Ryad Merhy), after this bout he has won four fights beating Cesar David Crenz in 2019.
His opponent, the undefeated former Olympian Imre Szello, has a perfect boxing record of 24-0-0 (16 knockouts) and he entered as the No.25 in the same weight class. In his last three bouts he has won over Gusmyr Perdomo, Denis Simcic and Juan Ezequiel Basualdo. Merhy vs Szello is valid for the interim WBA World cruiserweight title. Watch the video and rate this fight!