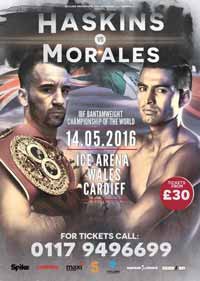 Review by AllTheBestFights.com: 2016-05-14, pretty boring fight between Lee Haskins and Ivan Morales: it gets two stars.

The Ibf Bw champion Lee Haskins entered this fight with a professional boxing record of 32-3-0 (14 knockouts) and he is ranked as the No.3 bantamweight in the world (currently the #1 in this division is Shinsuke Yamanaka). He fought twice last year defeating Omar Lamiri (=Haskins vs Lamiri) and Ryosuke Iwasa (=Iwasa vs Haskins).
His opponent, Ivan Morales, has an official record of 29-1-0 (17 knockouts) and he entered as the No.75 in the same weight class. He fought three times in 2015 winning over Danny Flores and Manuel Jimenez but between these two bouts he lost to Edgar Jimenez (by majority decision). Haskins vs Morales is valid for the IBF World bantamweight title (Haskins’ first defense). Watch the video and rate this fight!