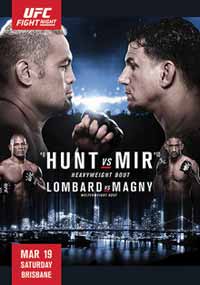 Review by AllTheBestFights.com: 2016-03-20, good finish between James Te Huna and Steve Bosse: it gets three stars.

James Te Huna entered this fight with a pro record of 16-8-0 (81% finishing rate) while his opponent, Steve Bosse, has an official mma record of 10-2-0 (90% finishing rate). Te Huna comes off three consecutive defeats, the last one against Nate Marquardt in 2014 (=Te Huna vs Marquardt), while Bosse suffered his last loss in 2015, against Thiago Santos (one of the best mma knockouts of the year, Santos vs Bosse). Te Huna vs Bosse is on the undercard of Mark Hunt vs Frank Mir – UFC Fight Night 85. Watch the video and rate this fight! 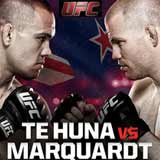 Review: 2014-06-28, James Te Huna vs Nate Marquardt gets three stars thanks to a good finish (UFC Performance of the Night). James Te Huna entered this fight with a professional mma record of 16-7-0 (81% finishing rate) and he is ranked as the No.20 light heavyweight in the world, he fought three times in 2013 winning the first bout, against Ryan Jimmo (=Te Huna vs Jimmo) but then he lost twice: against Glover Teixeira (=Teixeira vs Te Huna) and Mauricio “Shogun” Rua (=Rua vs Te Huna).
His opponent, the black belt in Bjj and Pancrase Pankration Nate Marquardt, has an official record of 32-13-2 (75% finishing rate) and he entered as the No.35 welterweight but he lost three out of three fights in 2013: against Tarec Saffiedine (losing the Strikeforce Ww title Marquardt vs Saffiedine), Jake Ellenberger (=Ellenberger vs Marquardt) and Hector Lombard (=Lombard vs Marquardt). Te Huna vs Marquardt is the main event of UFC Fight Night Auckland – Ufn 43. Watch the video and rate this fight!

Review: 2013-12-07, good start and spectacular finish: the fight between Mauricio ‘Shogun’ Rua and James Te Huna is very close to get four stars! Mauricio Rua (21-8-0, 91% finishing rate) entered as the No.11 light heavyweight in the world while James Te Huna (16-6-0, 82% finishing rate) entered as the No.19. Mauricio Rua vs Te Huna is on the undercard of Antonio Silva vs Mark Hunt – UFC Ufn 33. Watch the video!

Review: 2012-07-11, great fight with some heavy exchanges: three stars for James Te Huna vs Joey Beltran (UFC Fight of the Night). James Te Huna (14-5-0) entered as the No.36 light heavyweight in the world while Joey Beltran (14-7-0) entered as the No.64. Te Huna vs Beltran is on the undercard of Mark Munoz vs Chris Weidman (UFC on Fuel TV 4); on the original fight card Te Huna was expected to face Brandon Vera. Rate the video!