Review by AllTheBestFights.com: 2022-04-30, some good exchanges but it is not enough to get three stars: the mma fight Grant Dawson vs Jared Gordon gets two.
Gordon vs Dawson is on the undercard of Rob Font vs Marlon Vera – UFC Vegas 53 (also known as UFC on ESPN 35). Watch the video and rate this fight! 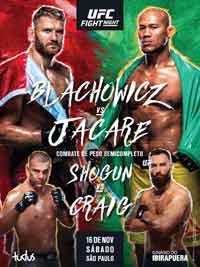 Review by AllTheBestFights.com: 2019-11-16, good fight between Charles Oliveira and Jared Gordon: it gets three stars (UFC Performance of the Night).

The black belt in Brazilian jiu-jitsu Charles Oliveira entered this fight with a professional record of 27-8-0 (93% finishing rate) and he is ranked as the No.7 lightweight in the world. ‘Do Bronx’ Oliveira was defeated by Paul Felder in 2017 (Charles Oliveira vs Paul Felder) but then he has won five bouts beating David Teymur (Charles Oliveira vs David Teymur) and Nik Lentz in 2019 (Charles Oliveira vs Nik Lentz 3).
His opponent, Jared Gordon, has a mma record of 15-3-0 (53% finishing rate) and he entered as the No.106 in the same weight class. He lost two consecutive fights last year, against Diego Ferreira and Joaquim Silva, but he came back to win with Dan Moret in 2019. Oliveira vs Gordon is on the undercard of Jan Blachowicz vs Ronaldo Jacare Souza – UFC Fight Night 164 (UFC on ESPN+ 22). Watch the video and rate this fight!