Review: 2014-12-05, nice and tough fight between Jean Marc Mormeck and Mateusz Masternak: it gets three stars. The former Wbc and Wba Cw champion Jean Marc Mormeck entered this fight with a pro boxing record of 37-5-0 (23 knockouts) and he is ranked as the No.27 cruiserweight in the world, he suffered his last defeat in 2012 when he moved up in weight class to the heavyweight division and he faced Wladimir Klitschko (=Klitschko vs Mormeck); since then he has fought just once beating Tamas Lodi.
His opponent, the 27-year-old Mateusz Masternak (15 years older than Mormeck), has a record of 33-2-0 (24 knockouts) and he entered as the No.22 in the same weight class, both his losses occurred between 2013 and 2014: against Grigory Drozd (=Masternak vs Drozd) and Youri Kalenga (=Masternak vs Kalenga); after this bout he came back to win defeating Ben Nsafoah. Mormeck vs Masternak is on the undercard of Zine Eddine Benmakhlouf vs Toni Visic. Watch the video and rate this fight! 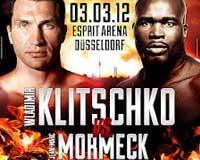 Review: 2012-03-03, good knockout in the fourth round but the fight was bad: only two stars for Wladimir Klitschko vs Jean-Marc Mormeck (fight ended by TKO in the fourth round). Wladimir Klitschko, ranked as the No.1 heavyweight in the world, entered the fight with a record of 56-3-0 while Jean-Marc Mormeck had a record of 36-4-0 (he is not ranked as he hasn’t fought since December 2, 2010). Klitschko vs Mormeck is valid for the WBA, IBF, WBO, IBO heavyweight titles. Watch the video!