Review: 2012-10-12, good and fast ending between Mike Richman and Jeremy Spoon: three stars. Mike Richman (12-1-0) entered as the No.55 featherweight in the world while Jeremy Spoon (12-1-0) entered as the No.58. Richman vs Spoon, quarterfinal of the Bellator featherweight tournament, is on the undercard of Eddie Alvarez vs Patricky ‘Pitbull’ Freire – Bellator 76. Watch the video!

END_OF_DOCUMENT_TOKEN_TO_BE_REPLACED 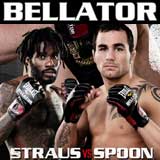 Review: 2012-03-09, pretty fight between Daniel Straus and Jeremy Spoon but it is not enough to get three stars (fight ended by unanimous decision). The undefeated Jeremy Spoon, ranked as the No.38 featherweight in the world, entered the fight with a record of 12-0-0 while Daniel Straus had a record of 17-4-0. Straus vs Spoon is the quarterfinal of the Bellator Featherweight Tournament; undercard of Joe Warren vs Pat Curran (Bellator 60). Watch the video!