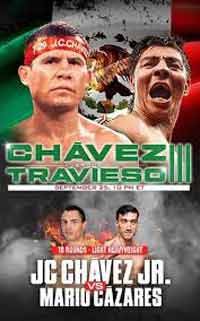 Review by AllTheBestFights.com: 2020-09-25, amazing exhibition between Julio Cesar Chavez Sr and Jorge Arce 3, if it was a real fight, it would get 4 stars!
The multiple-time world champion in three weight divisions (inducted into the International Boxing Hall of Fame since 2010) Julio Cesar Chavez entered this fight with a professional boxing record of 107-6-2 (85 KOs=79%) but he is not ranked as he hasn’t fought since September 17, 2005 when he was defeated by Grover Wiley when JC was 43 years old (he is 58 now); before this fight he had beat Ivan Robinson and Frankie Randall.
His opponent, the former world champion in four different weight classes Jorge Arce, has an official record of 64-8-2 (49 KOs=76%) but he is also not ranked because he hasn’t fought since October 4, 2014 when he lost to Jhonny Gonzalez (Jhonny Gonzalez vs Jorge Arce); before this bout he had won over Jorge Lacierva (Jorge Arce vs Jorge Lacierva). Travieso vs Chavez 3 is the main event of the evening but it is just an exhibition fight to support vulnerable people who have suffered from the coronavirus pandemic in Mexico. Watch the video and rate this fight! 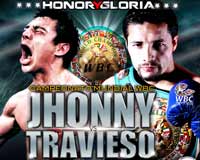 Review: 2014-10-04, disappointing fight between Jhonny Gonzalez and Jorge Arce: it gets two stars. Jhonny Gonzalez entered this fight with a pro boxing record of 56-8-0 (47 KOs=84%) and he is ranked as the No.2 featherweight in the world, he suffered his last defeat in 2012 when he faced Daniel Ponce De Leon losing his Wbc Fw belt (=Gonzalez vs Ponce De Leon); after that bout he won four consecutive fights, the last one against Clive Atwell (=Gonzalez vs Atwell) successfully defended the Wbc title that had previously won against Abner Mares (=Mares vs Gonzalez).
His opponent, Jorge Arce, has an official record of 64-7-2 (49 KOs=76%) and he entered as the No.25 in the same weight class, he has won world titles in five different weight classes (Gonzalez in two), but the last time he fought for a world belt was in 2012 and he lost to #1 Nonito Donaire (=Donaire vs Arce); since then he has moved up in weight class winning three bouts, the last one against Jorge Lacierva (=Arce vs Lacierva). ‘Travieso’Arce vs Gonzalez is valid for the WBC featherweight title (Gonzalez’s second defense). Watch the video and rate this fight! 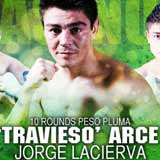 Review: 2014-03-08, some good exchanges between Jorge Arce and Aldimar Silva Santos but it is not enough to get three stars. Jorge Arce entered this fight with a professional boxing record of 62-7-2 (47 KOs=76%) and he is ranked as the No.13 featherweight in the world, he has won world titles in four different weight classes and this year he will probably try the fifth; last year he fought just once winning against Jose Carmona (=Arce vs Carmona).
His opponent, Aldimar Silva Santos, has an official record of 19-7-0 (10 knockouts) but he should be a very easy opponent for Arce since he lost five of his last seven bouts. Arce vs Silva Santos is the main event of the evening. Watch the video and rate this fight! 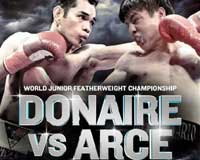 Review: 2012-12-15, good fight with three knockdowns: Nonito Donaire vs Jorge Arce gets three stars. Nonito Donaire (30-1-0, undefeated since March 10, 2001) entered as the No.1 super bantamweight in the world while Jorge Arce (61-6-2 with 46 victories coming by way of knockout) entered as the No.5. Donaire vs Arce is valid for the WBO super bantamweight title (Donaire’s third defense). Watch the video!

Review: 2011-11-26, pleasant fight with some rounds really exciting (as the third and the last two); the first fight between Jorge Arce and Angky Angkota ended by technical decision in favour of the Mexican. Jorge “El Travieso” Arce (58-6-2) entered as the No.2 bantamweight in the world while Angky Angkota (25-5-0) entered as the No.41. Arce vs Angkota 2 is valid for the vacant WBO bantamweight title (Arce’s first attempt for a world title in the bantamweight division). Watch the video!

Review: 2011-09-24, good fight between Jorge Arce and Simphiwe Nongqayi. In their first fight (2009) Nongqayi defeated “Travieso” Arce by unanimous decision but in this second match Arce already knocked down the South African boxer in the first round. Nongqayi did not give up and is the referee that stopped the fight in the fourth. Jorge Arce (57-6-2) entered as the No.4 super bantamweight in the world while Simphiwe Nongqayi (16-1-1) was not ranked as he did not fight since July 31, 2010 (against Juan Alberto Rosas). Arce vs Nongqayi 2 was valid for the WBO super bantamweight title. Watch the video! 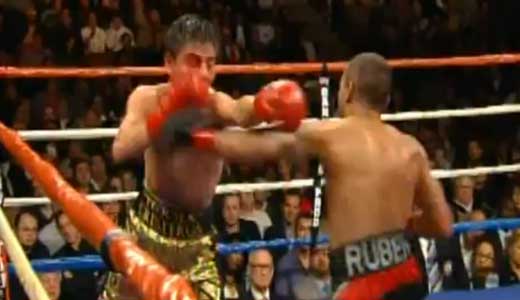 Review: 2009-02-07, the fight between Vic Darchinyan and Jorge Arce was one of the best boxing fights of 2009. Darchinyan (31-1-1) had just won the WBA and WBC super flyweight titles against Cristian Mijares and, during the previous fight (also in 2008) he had beat Dmitry Kirillov, winning the IBF belt. So Darchinyan was the king of the super flyweight category, but another warrior wanted to steal his titles: Jorge Arce (51-4-1), interim champion for the WBA. The bout was very exciting, but in the eleventh round, doctor stopped the fight for the cuts to Arce’s eyes, all three judges gave the victory to Darchinyan, 109-100. Watch the video!